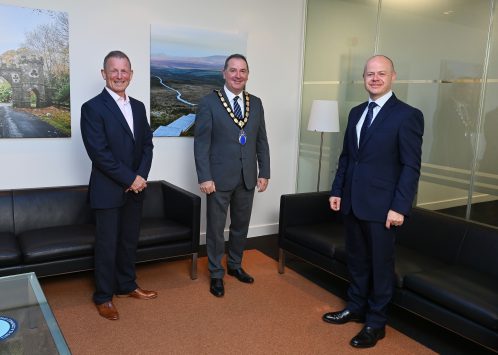 Northern Ireland Chamber of Commerce and Industry (NI Chamber) has announced the appointment of two new board members. Peter Russell, Managing Director of CANCOM Ireland and Professor Mark Gillan, COO at Artemis Technologies will contribute to the leadership and strategic direction of the membership and business support organisation.

Peter Russell joined CANCOM Ireland as Managing Director in January 2021 and holds responsibility for its business on the Island of Ireland. CANCOM Ireland is part of CANCOM UK&I, previously a subsidiary of CANCOM Group, until it was acquired by Telefónica Tech in July 2021. Prior to this, he held leadership positions with technology companies including Microsoft and BT. In 2017, he was appointed Sales and Marketing Director at Neueda, becoming Managing Director in 2019. Peter has also held third sector roles including being a former member of the Simon Community’s Corporate Fundraising Committee.

Mark Gillan started his career in aerospace, before spending 15 years in engineering leadership roles within Formula One, including as head of the race team at Williams F1.He went on to become CTO of Innovate UK, overseeing an annual funding portfolio of over £0.35B. In his current role as Chief Operations Officer for Artemis Technologies, Mark leads the technical, manufacturing and services side of the business, whose mission is to lead the decarbonisation of the maritime sector. Mark is also Programme Director for the Belfast Maritime Consortium’s UKRI funded Strength in Places Programme, which Artemis Technologies leads – it is focused on developing zero emissions passenger ferries. He is a Chartered Engineer, Fellow of the Royal Aero Society and a Visiting Professor of both Surrey and Ulster Universities.

“We are delighted to welcome two new board members of such caliber to NI Chamber. Peter and Mark bring a wealth of local and global business experience to this organisation. Their expertise in digital transformation and high-performance technological engineering brings a new dimension to our board and will be of enormous benefit to our members in all sectors across Northern Ireland.”

New President's cause for optimism