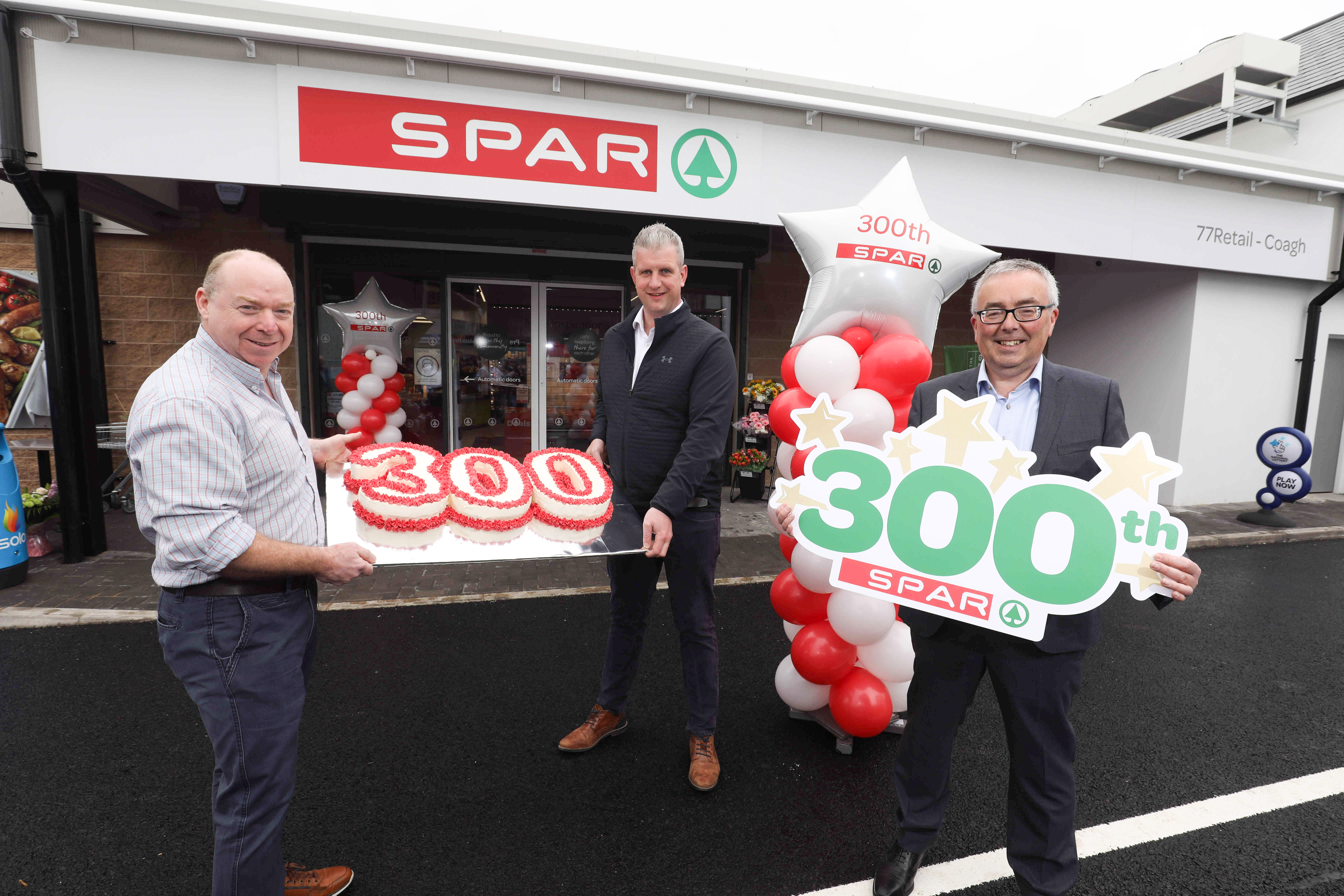 SPAR, the brand operated by Henderson Group continues to dominate the grocery landscape in Northern Ireland as the 300th SPAR store opened in Co. Tyrone on Friday.

Celebrating 60 years since the brand arrived in Northern Ireland in 1961, and reaching a milestone store number this year, SPAR’s growth is set against a strategy that will see Henderson Group open 13 stores and supermarkets in 2021, with SPAR Coagh the fifth this year so far.

SPAR Coagh has brought 24 new jobs to the local area and represents an investment of nearly £500,000 by operators Andy Davis and Graham Johnston of SPAR 77 Retail. It sits on the site formerly owned by John and Pearl McGaw where they ran their motor store for 47 years.

Paddy Doody, Sales & Marketing Director at Henderson Group said this was a momentous occasion for the business and symbolised the opportunities the brand has brought to local entrepreneurs.

“SPAR has brought countless opportunities for entrepreneurs, independent retailers and local suppliers since it arrived in the ‘60s, and no more so than in recent years. The concept has evolved and developed as consumer shopping behaviour and demands have changed.

“SPAR is an international network, and our retailers thrive from it on a local level. We offer hundreds of locally sourced fresh ranges and produce which not only meet demand but support our thriving agri-food industry, providing profitable businesses for our retailers setting them apart from their competitors.

“We have great ambitions for the remainder of 2021 and will continue to open stores and supermarkets that have been built with the local shopper in mind, including SPAR Coagh which represents the next era for SPAR and its fresh food offering.”

Local shoppers can expect aisles of fresh bays packed with locally sourced products, including enjoy local and The Greengrocers own brands from Henderson Wholesale.

Andy added; “We are very proud to be operating SPAR Coagh, a milestone store for the brand, and on a site that has been serving the community for nearly 50 years already.

“We opened SPAR Cadogan in 2010 and since then have built our own network of SPAR stores across Northern Ireland, employing over 140 people across six sites. We are passionate about bringing an amazing shopping experience made for those local communities and developing careers within our retail industry.

“We are looking forward to getting to know our neighbours and welcoming our shoppers in-store alongside our store manager, Nicky Huddelson, who is local to Cookstown. We’re bringing a proposition to the village that is in demand, from our Solo forecourt to Barista Bar coffee as well as self-check-out areas which offer a contactless cash solution from Glory.”

Ryanair flights to Europe take off from Belfast City Airport