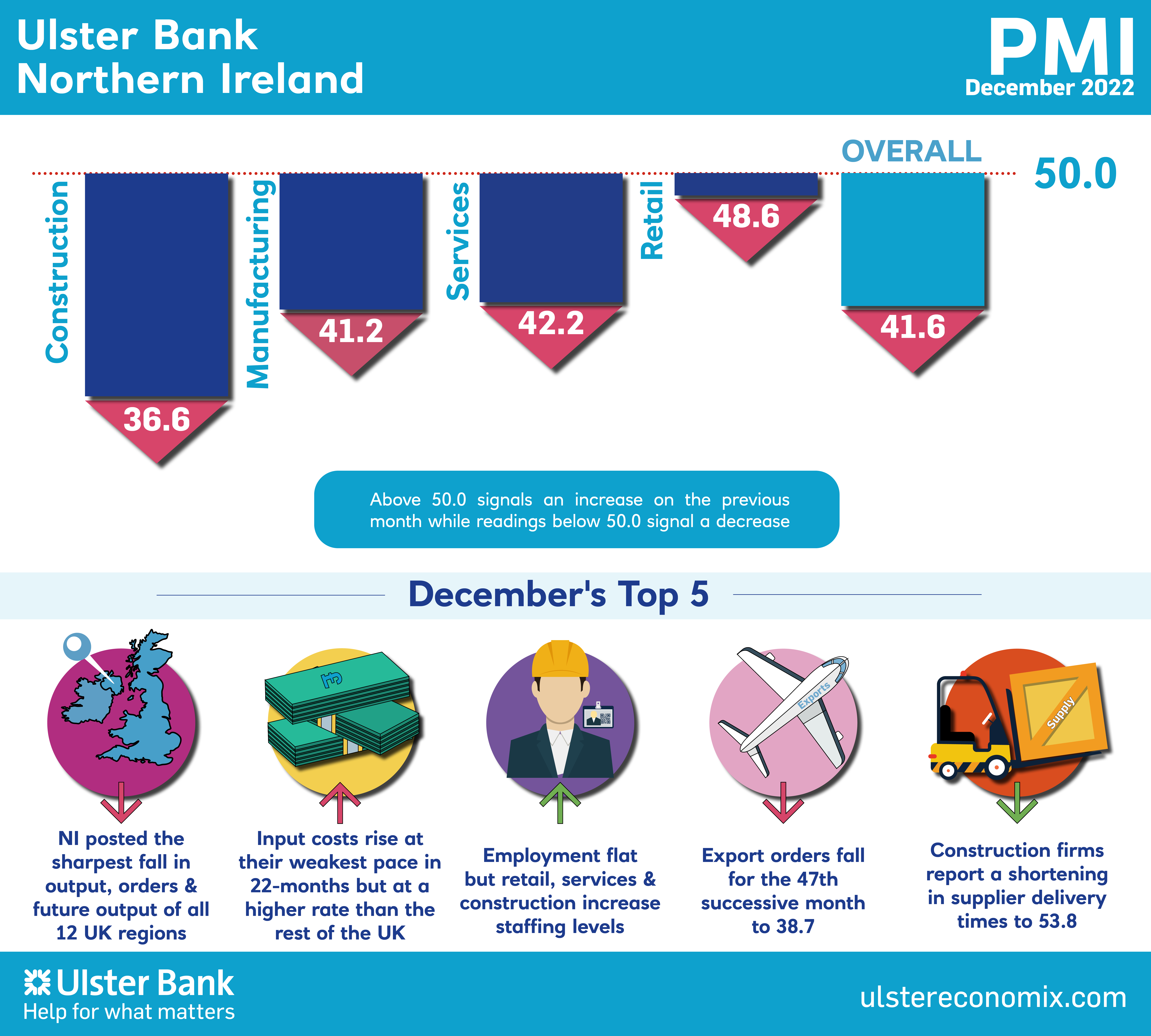 Today sees the release of December data from the Ulster Bank Northern Ireland PMI®. The latest report – produced for Ulster Bank by S&P Global – pointed to a difficult end to 2022 as new orders fell sharply again and the rate of decline in output accelerated. Employment was unchanged, following 21 months of job creation. Meanwhile, inflationary pressures moderated.

“Northern Ireland’s private sector started last year in expansion mode as the post-pandemic economic recovery gathered pace. Last January, businesses were optimistic for the year ahead with the expectation that growth would continue. This proved not to be the case. Largely as a result of the Russian invasion of Ukraine, which added fuel to the cost-of-living crisis, growth petered out and confidence ebbed away. Northern Ireland’s private sector therefore ended the year on a much more negative note. December saw output and orders fall for the eighth successive month. The contraction in output was the steepest in a decade outside of lockdowns. All four sectors posted declines in output and orders although retail, services and construction firms did increase their staffing levels. The good news is that inflationary pressures moderated with firms reporting the weakest rise in input costs in 22 months. As a result, firms raised their prices at their slowest pace in almost two years. But these price rises still exceed anything that occurred in the pre-pandemic era. This time last year, firms were braced for a challenging year, but it turned out much worse than anticipated. December’s report suggests that negative sentiment is receding and that we may have passed peak pessimism. This year, expectations for the 12-months ahead are low but we could see the converse of last year with expectations being exceeded this time around.”

The main findings of the December survey were as follows:

The headline seasonally adjusted Business Activity Index fell sharply to 41.6 in December from 46.0 in November, pointing to a much faster reduction in output in the private sector at the end of 2022. In fact, the decline was the steepest since February 2021. The cost of living crisis was reportedly a key factor behind the drop in activity as new orders continued to fall sharply. Activity decreased across all four broad sectors covered by the survey, with the fastest reduction in construction.

Employment was unchanged in December, thereby ending a 21-month sequence of job creation. While some firms were able to expand their staffing levels, others reported voluntary resignations and difficulties recruiting. There were further signs of inflationary pressures moderating in December, with both input costs and output prices rising at the slowest rates since early-2021. That said, prices continued to increase rapidly. Where input costs were up, panellists mentioned higher costs for energy and transportation. Suppliers’ delivery times continued to lengthen, with delays linked to Brexit and postal strikes. Although companies remained downbeat on the prospects for output growth during 2023 due to the cost of living crisis and political uncertainty, sentiment improved to an eight-month high. 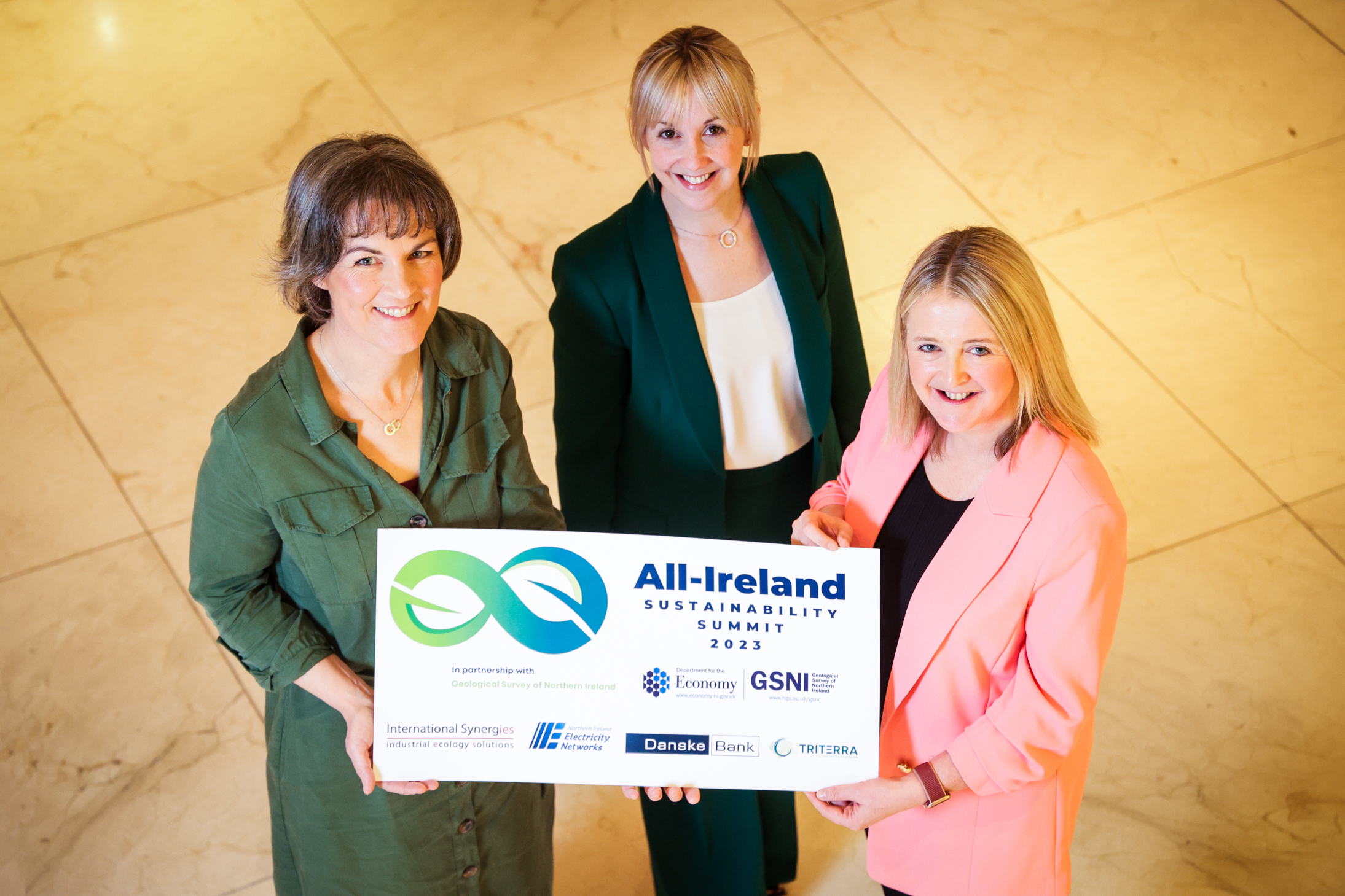