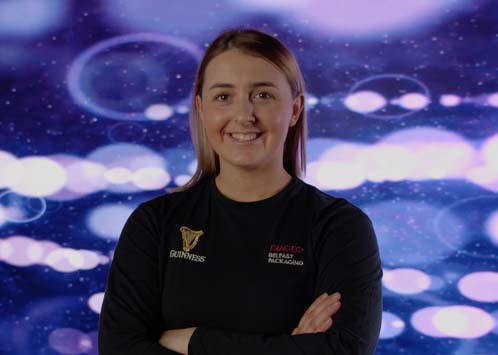 Lauren (23), from Comber, is completing the Level 3 Engineering Apprenticeship at SERC’s Lisburn Campus and is employed by Diageo at their beer packaging site in Belfast. The young woman was one of three finalists in the Apprentice category of the Northern Ireland Apprenticeship Awards, a key part of the Northern Ireland Apprenticeship Week 7 – 11 February, led by Department of Economy. Winners were announced at a livestreamed Awards Ceremony hosted by Minister Gordon Lyons, presented by Sarah Travers, and former two-weight world champion boxer Carl Frampton was in attendance.

Ken Webb, Principal and Chief Executive of SERC said,” Congratulations to Lauren on this Apprenticeship Award. Not only has Lauren proved to be a top apprentice but she has become an ambassador for women in engineering and a perfect example of anything is possible when you have determination.”

Lecturer Ivan Kelly said, “We are so proud of Lauren in her achievement, she deserves this award and I know she will have a wonderful career in engineering. The award is a credit to Lauren’s outstanding commitment to her vocation and we are delighted to be part of her apprenticeship journey with Diageo Belfast Packaging.”

SERC is keen to encourage more young women to take up engineering and is working with Limerick University to find out what would attract females into the sector – click here for more information.