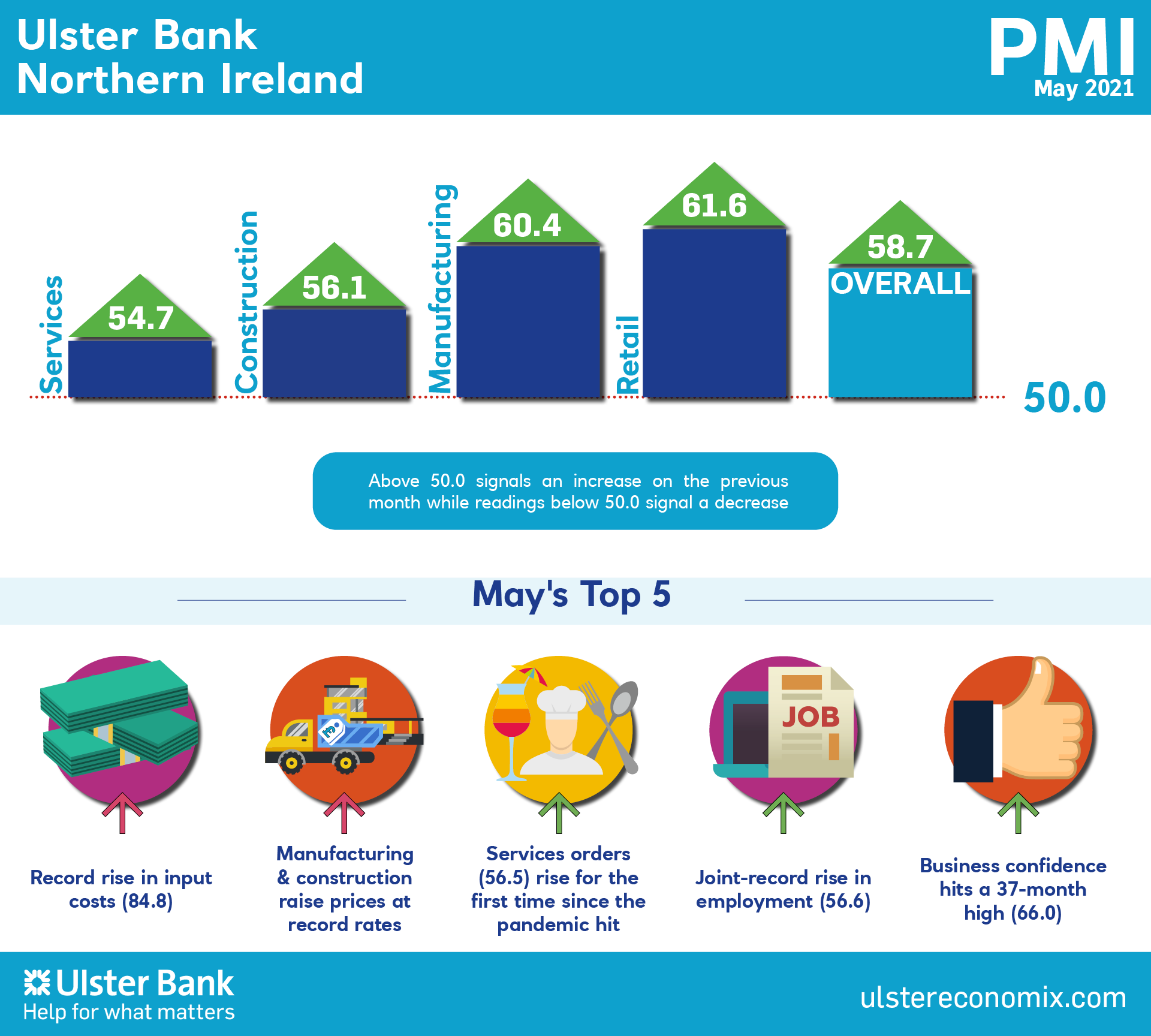 Activity ramps up amid lockdown easing

Today sees the release of May data from the Ulster Bank Northern Ireland PMI®. The latest report – produced for Ulster Bank by IHS Markit – pointed to marked improvements in new orders and output. The extent of the increase in workloads meant that firms expanded their staffing levels at a pace unsurpassed in almost 19 years of data collection. That said, inflationary pressures remained elevated, with the pace of increase in input costs accelerating again.

“PMI surveys around the world hit record highs in May. These included the UK and Republic of Ireland – the two most important economies for driving Northern Ireland’s recovery. With the further loosening of lockdown restrictions, business conditions improved significantly in Northern Ireland too. While falling short of record highs, local firms did report the fastest rates of expansion in business activity and new orders in 40 months. The last time local businesses posted faster rates of output growth was back in the summer of 2014.

“All four sectors saw output growth for the first time since January 2019 with retail and manufacturing recording the fastest rates of expansion with PMI readings in the sixties. Northern Ireland’s services firms finally posted a pick-up in new orders for the first time since the pandemic took hold. Construction was the only sector not to see a pick-up in new orders with incoming demand falling significantly and marking the sixth successive month of decline. This contrasted starkly with UK construction firms which saw new orders hit the fastest growth rates to date.

“The rest of the local PMI survey was littered with highs. Strong growth in domestic demand has led to a pick-up in hiring with local firms increasing their headcount at the joint-fastest rate on record. Manufacturing led the way with staffing levels rising at the fastest pace in the survey’s history.

“But record highs of the negative variety were also on show with input cost inflation once again rising at a record rate. Manufacturers, retailers and construction firms also raised the prices of their goods and services at the fastest pace in the survey’s nineteen-year history. Across the UK, Northern Ireland firms continue to experience the most severe rates of inflation with firms invariably linking the increased costs and lengthening delivery times to Brexit paperwork.

“The outlook is certainly improving with local firms the most optimistic about output in 12 months’ time in over three years and sentiment in manufacturing hitting a new survey high. Northern Ireland could well see a new high in output growth in the next month or two. Nevertheless, significant challenges remain. Global supply chain disruption and inflationary pressures, though expected to be transitory, will act as a headwind to the rapid recovery.  Meanwhile as we saw last week, the continuing saga that is Brexit and the Northern Ireland Protocol, will be a source of political and economic turbulence for the foreseeable future.”

The main findings of the May survey were as follows:

The headline seasonally adjusted Business Activity Index rose to 58.7 in May from 55.5 in April. The reading signalled a second successive increase in output in the private sector, and one that was the joint-strongest for almost seven years. The reopening of some businesses and the release of pent-up demand following the loosening of COVID-19 restrictions were central to the latest rise in activity. All four monitored sectors saw activity rise, led by retail and manufacturing. New order growth also quickened and was the fastest since January 2018. New export business continued to fall, however. Increases in total new orders contributed to a solid rise in backlogs of work.

Higher workloads led firms to take on extra staff at a rapid rate, with the pace of job creation the joint-fastest since the survey began in August 2002. Manufacturers posted the sharpest pace of job creation. Inflationary pressures were also at record highs, however. The rate of input cost inflation quickened for the eighth month running and was by far the sharpest in the survey’s history. Panellists reported higher prices for raw materials, transportation and staff, while often linking increased cost burdens to Brexit. The rate of charge inflation was unchanged from April’s record. 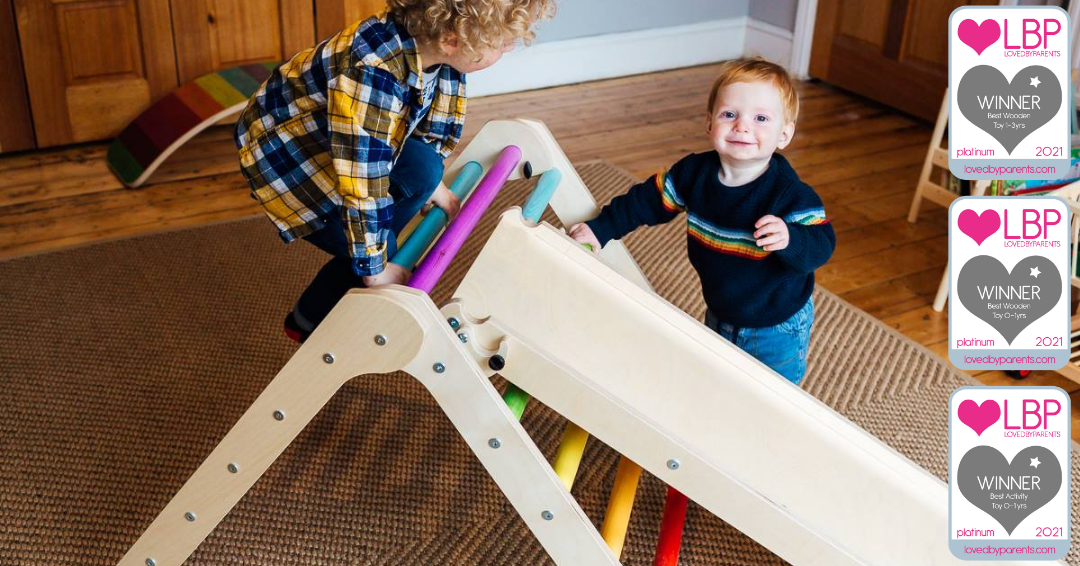 Sawdust and Rainbows are excited to announce that their best-selling wooden indoor climbing frame, the Wee’UN has been honoured with multiple awards by Loved by Parents 2021!