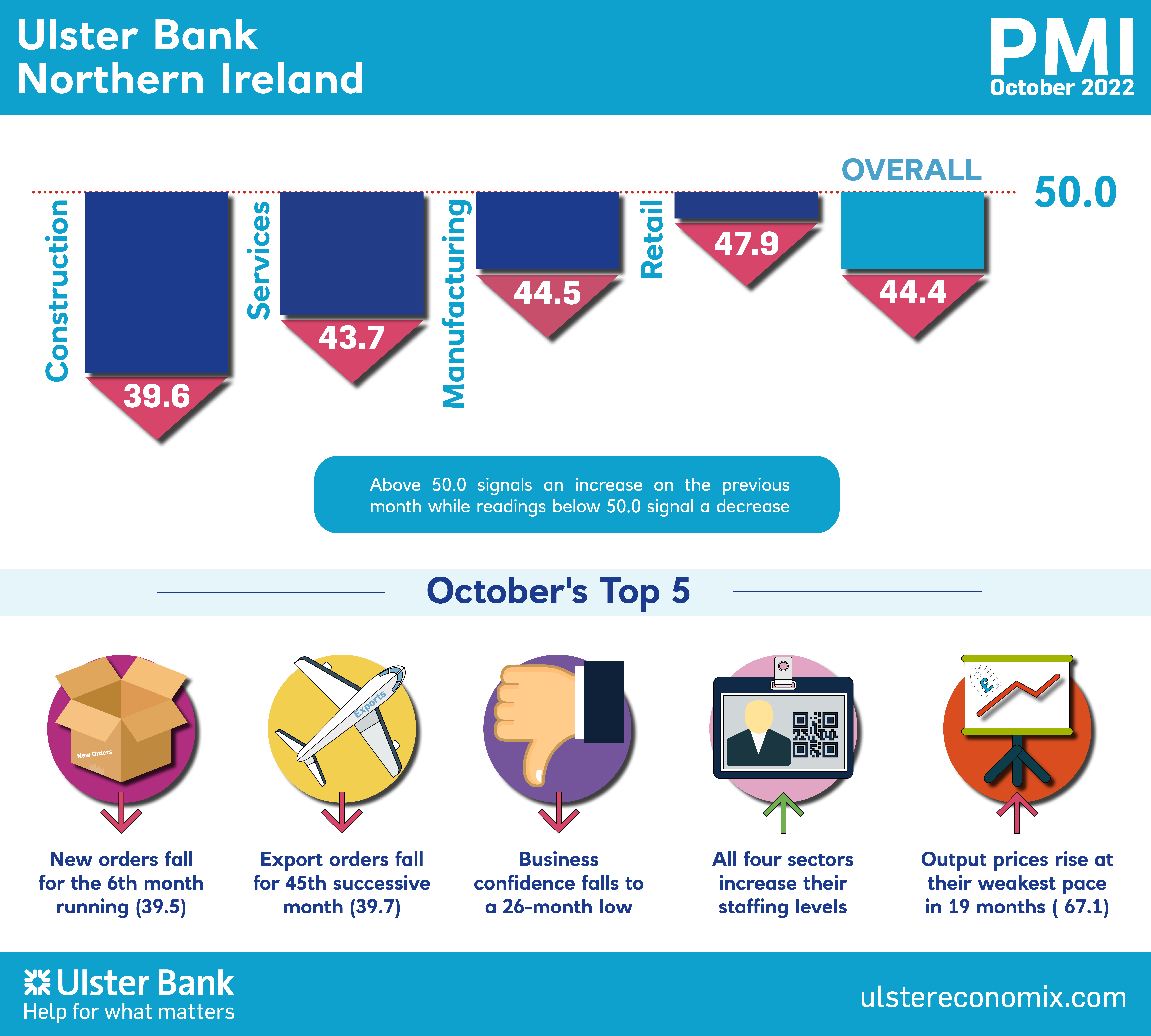 Today sees the release of October data from the Ulster Bank Northern Ireland PMI®. The latest report – produced for Ulster Bank by S&P Global – pointed to further reductions in activity and new orders amid ongoing cost pressures, while business confidence sank further. That said, companies continued to expand their staffing levels as part of efforts to rebuild workforce numbers following the pandemic.

“Last month saw all 12 UK regions fall into contraction mode as far as business activity was concerned. For Northern Ireland’s private sector it was the sixth successive monthly fall in activity with all four of the sectors surveyed falling below the 50 expansion / contraction threshold.

“New orders also contracted for the sixth month running with October’s rate of decline the steepest – outside of the pandemic – since January 2011. Northern Ireland firms also posted the biggest drop in incoming work last month of the 12 UK regions. Cost pressures and economic uncertainty were cited as key factors behind the fall in demand. Export orders remain particularly weak with the latest monthly decline the forty-fifth in-a-row.

“Once again positives were in short supply and largely confined to employment. Despite falling demand, all four sectors – manufacturing, services, retail and construction  – increased their staffing levels in October. Firms suggest that this pick-up in hiring is linked to longstanding recruitment difficulties and rebuilding workforces following the pandemic.

“The sources of inflationary pressures remain broad-based encompassing wages, raw materials, energy and shipping costs.  Output price inflation remained elevated but well down on the record rates posted earlier in the year. Indeed, firms raised the prices of their goods and services at their weakest rate in 19 months.

“Given the evolving ‘cost of everything’ crisis it is not surprising that business confidence sank to a 26-month low.  All four sectors anticipate lower levels of activity in 12 months’ time. Sentiment is not likely to improve anytime soon with this week’s Autumn Statement expected to yield more fiscal pain rather than comfort.”

The main findings of the October survey were as follows:

The headline seasonally adjusted Business Activity Index posted 44.4 in October, up from 42.3 in September but still signalling a marked monthly reduction in output. The cost of living crisis, caution among customers and an associated drop in new orders were reportedly behind the latest fall in activity. Each of the four broad sectors covered by the survey saw business activity decline in October. The rate of contraction in new orders quickened slightly and was the fastest since January 2021, while new export business was also down sharply.

Input costs continued to rise rapidly, with energy, raw materials, shipping and staff also increasing in price. In turn, output prices increased sharply, albeit at the slowest pace in 19 months. As well as impacting activity in October, the cost of living crisis and concerns around economic conditions hit business sentiment which fell to the lowest since August 2020. On a more positive note, employment increased for the twentieth successive month in October. Panellists linked the rise to ongoing efforts to rebuild workforces following the pandemic and a sustained period of difficulty in recruiting staff. With employment up and new orders falling sharply, backlogs of work were depleted for the fifth month running. 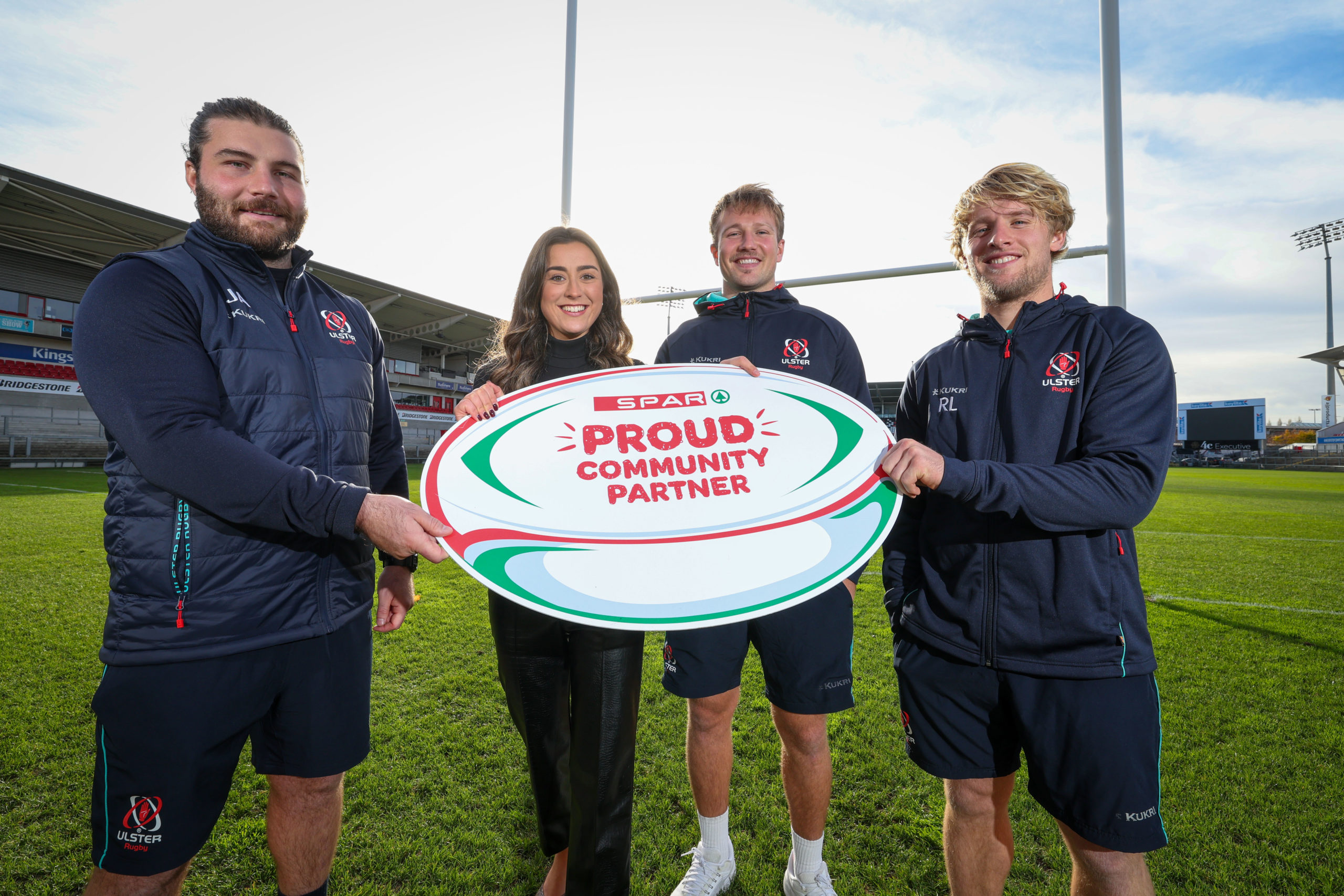