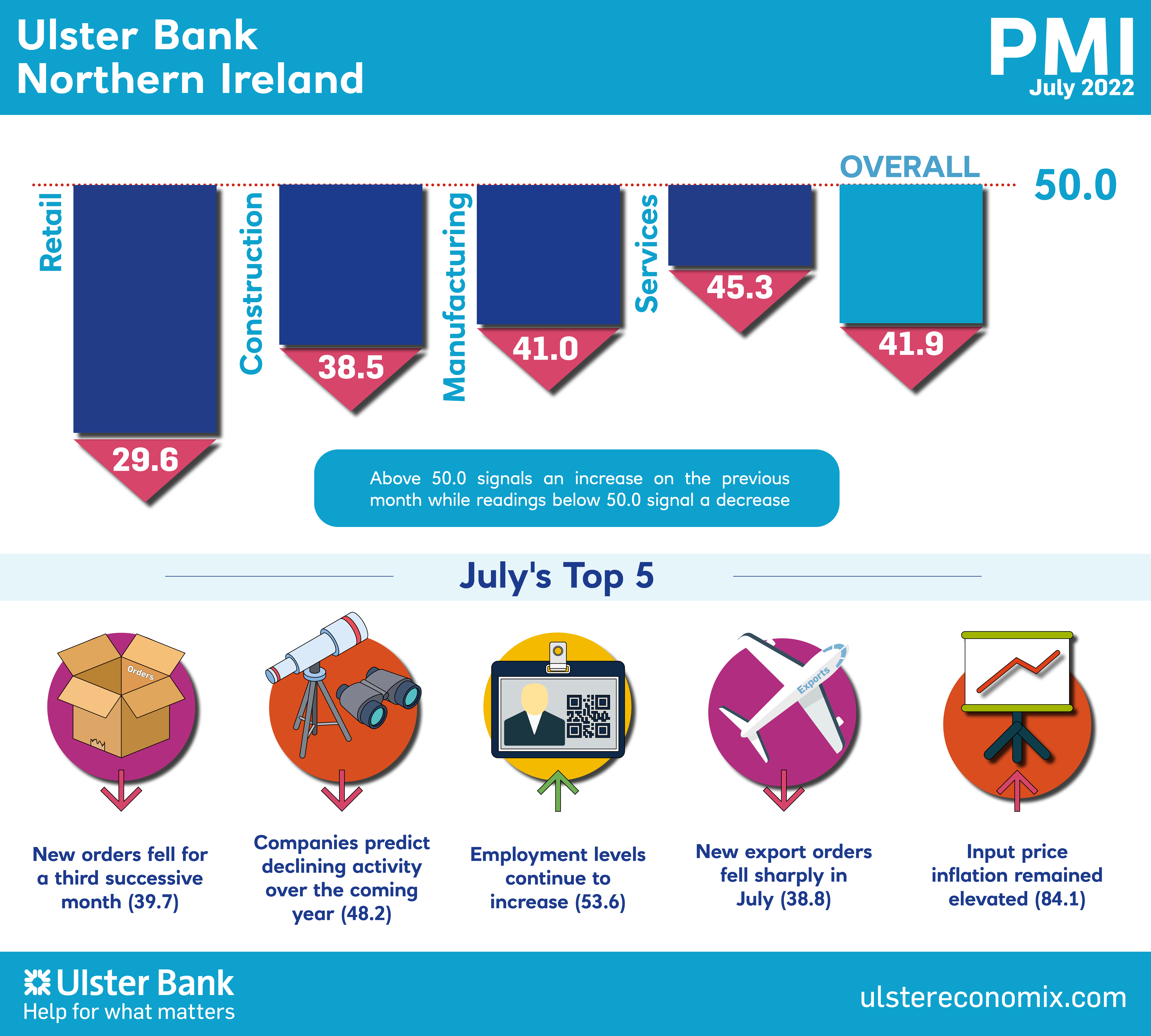 Today sees the release of July data from the Ulster Bank Northern Ireland PMI®. The latest report – produced for Ulster Bank by S&P Global – signalled that declines in customer demand amid strong inflationary pressures led to further sharp reductions in output and new orders in the Northern Ireland private sector. Rates of inflation remained elevated over the month, despite showing signs of easing. The main positive from the latest survey was a further rise in employment.

“Northern Ireland households may be basking in sunshine but as far as the economy is concerned storm clouds continue to gather. Last month witnessed a further deterioration in local business conditions with business activity contracting at its fastest pace in 17 months. Outside of the Covid pandemic and lockdown restrictions, July’s rate of decline in business activity was the steepest since November 2012.

“Declining market demand is attributed to rising prices.  And while the rates of input cost and output price inflation are easing, they remain elevated. As a result, new orders fell for the third month running and, when excluding the pandemic period, at the fastest pace in over a decade. Local firms cited increasing difficulties finding work in the Republic of Ireland.

“The drop in demand was broad based across all sectors with services experiencing the smallest declines in output and new orders. Perhaps unsurprisingly, given the cost-of-living crisis, retail recorded the steepest declines in sales and orders.  Retail sales have plunged over the last three months and retailers expect sales to be broadly unchanged (i.e. at these lower levels) in twelve months’ time.  Firms within the services and construction industries remain pessimistic about the year ahead with both sectors anticipating lower levels of activity within the next twelve months.  Despite a marked drop in orders in recent months, manufacturing is the only sector forecasting a pick-up in activity in that timeframe.

“Positives remain in short supply in the latest survey.  However, employment continues to be a bright spot with all four sectors increasing their staffing levels in July. But with the Bank of England forecasting a UK recession, a softening in the labour market will be expected going into 2023. That said, the labour market is likely to be much more robust this time than in previous recessions.”

The main findings of the July survey were as follows:

The headline seasonally adjusted Business Activity Index dropped to 41.9 in July, down from 42.9 in June to signal a sharp contraction in output in the Northern Ireland private sector, and one that was the steepest since February 2021. Retail posted the fastest decline in activity, followed by construction and then manufacturing. Although marked, the reduction in services was the softest of the four broad sectors covered. Where output decreased, respondents linked this to the impact on demand of sharply rising prices. This also resulted in a third successive fall in new orders, with the latest decline the fastest in a year-and-a-half.

Rates of inflation in both input costs and output prices remained elevated in July, but in each case showed further signs of easing. Where costs increased, panellists reported higher fuel prices feeding through to increased transportation costs, plus wage rises. Employment increased solidly, extending the current sequence of job creation to 17 months. A combination of falling new orders and expanded operating capacity enabled firms to deplete outstanding business at a rapid pace. Companies were again pessimistic regarding the 12-month outlook for activity, but less so than in the previous month. 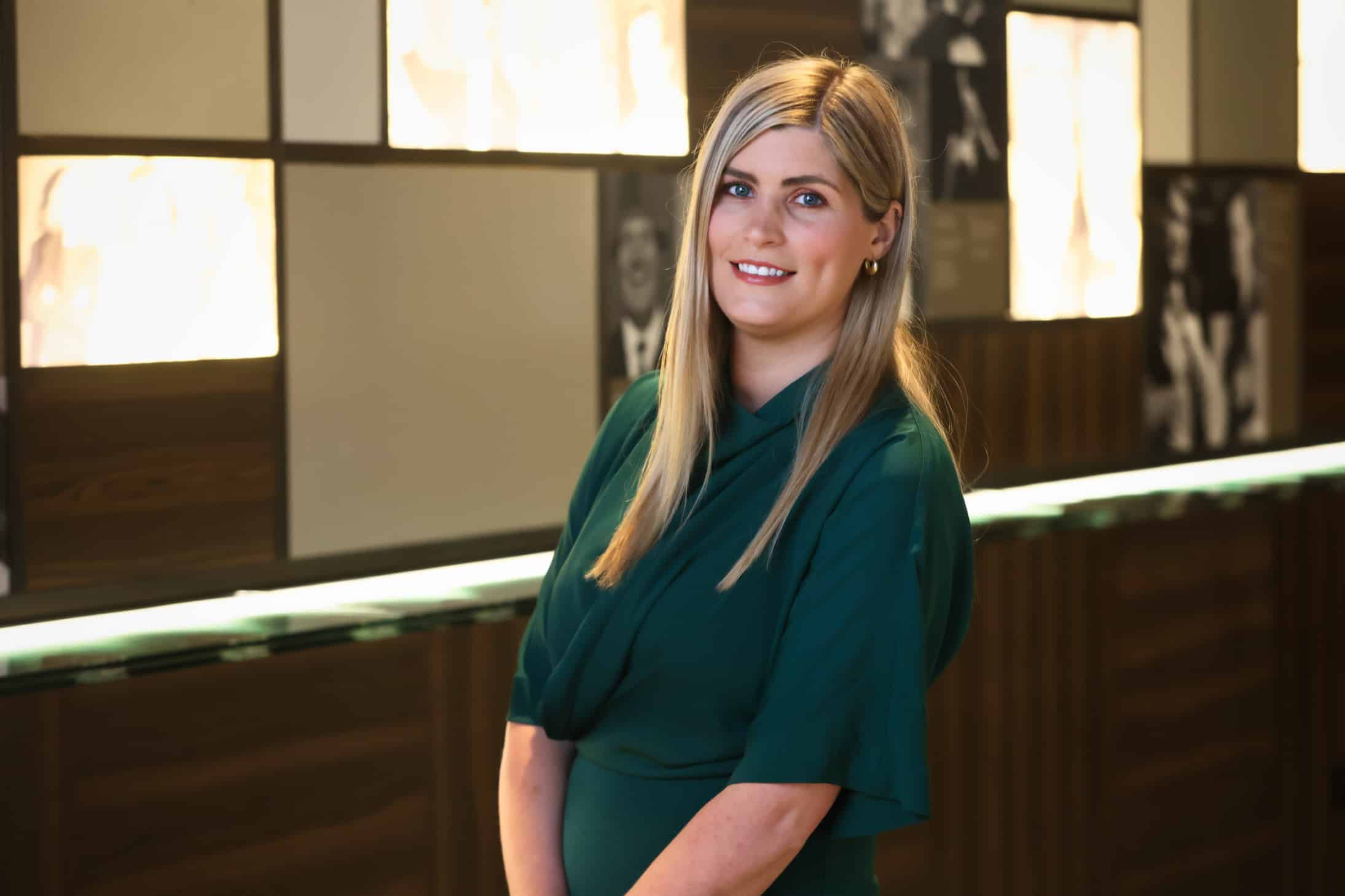